Is Your Pool Compliant? Bancroft aquatic specialists highlight current ADA regulations, enforcement, and steps to bring your facility into compliance. 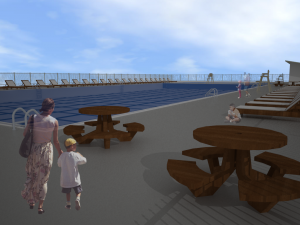 On July 1, 2004, the Access Board released a revision to the original ADAAG, called ADAAG 2004. This revision was the culmination of a ten year effort to both address areas not covered in the original ADAAG and to eliminate inconsistencies in the original guidelines. Like any revision issued by the Access Board, ADAAG 2004 was effective only as guidance document for the Department of Justice and had no legal bearing on the public until a final rule was issued adopting the revised ADA Standards.

On June 17, 2008, the Department of Justice issued a Notice of Proposed Rule Making (NPRM) to formally adopt ADAAG 2004. This notice was followed by a public comment period which ended on August 17, 2008. After considering the public comments that followed the NPRM, the Department of Justice announced their final rule making decision that formally adopted ADAAG 2004 on July 26, 2010. These revised regulations took effect six months following their publication in the Federal Register. Compliance with these regulations was required eighteen months after the date of publication. These revised regulations were published just prior to the end of 2010.

No accessibility guidelines were provided for swimming pools in the 1991 Standards. Facilities housing swimming pools were covered in the original guidelines and areas surrounding the pool, such as locker rooms, pathways, and the parking lot were required to be accessible. However, no regulations were in place that specifically addressed getting a person into and out of the pool.

ADA regulations are enforced in ways that are both direct and indirect. Most direct enforcement is a result of civil lawsuits that are initiated by a plaintiff who sues an entity for non-compliance. While it is unusual for awards to be provided to the victorious plaintiff, the court usually does provide injunctive relief in the form of a court order that would require the defendant to remedy the violation (along with attorney’s fees for the plaintiff). There is a network of “professional plaintiffs’ who have made a career of initiating such lawsuits under the banner of disability advocacy.

The ADA is also enforced indirectly by requiring compliance prior to receiving licenses, certifications, or grants from prevailing authorities. For example, prior to a local public entity receiving a federal grant, they must provide proof of compliance with a wide array of regulations ranging from environmental mandates to equal opportunity programs like the ADA. In addition, in most municipalities, any new construction or building modification will not receive a certificate of occupancy without meeting all relevant ADA requirements.

Solution to the Accessibility Compliance

BANCROFT ARCHITECTS and ENGINEERS – Let us help facilitate your compliance